How investing in UX will save you money and time

If you have ever worked on a new business idea or a new venture, for instance in the innovation department of a large company, you’ve probably heard about User Experience (UX) and how it can help you build a product that hits a quicker market fit.

You might have also crunched the numbers and come to the conclusion that adding UX researchers to your project takes a substantial part of your budget.

Indeed, UX is often the first candidate when it comes to cutting time and costs on a project - if it is being considered for a project in the first place at all. As a matter of fact, most of our clients confess that their innovation ideas and projects are often executed without any involvement of user research and without ever talking to their target customers.

However, this is an incorrect assessment of the situation as the value of UX in the process of building out a product is widely underestimated and not well understood by decision makers. Properly executed user research and design can save you a lot of money and significantly shorten the development time of your project. In fact, the absence of UX in projects can cost a company much more than the initial investment in it.

Let us tell you why.

“What could possibly go wrong?”

There are two major problems when working on a new project without incorporating a proper user-centric approach.

So, how exactly does UX help in preventing these problems? And how large is the Return of Investment (ROI) of UX in the process of developing a product? In the following we describe both scenarios with concrete and quantified examples and assess the ROI of UX in these cases.

Failing fast yields in a higher chance of product success

Imagine there’s a company that decides to build an MVP for a new product idea, without plans on involving any UX resources in the process. Let’s assume that the development time is approximately 6 months, and the developer costs are, on average, 10.000€ per month. If the company discovers that the MVP fails after it has been fully developed, it will have already spent a total of 60.000€ per developer. The total costs with an average team of 6 developers would add up to 360.000€.

Imagine instead that the company decides to invest in 2 UX researchers for a total of 1 month at an early stage of the project (before the actual development of the prototype or the MVP). Assuming an average cost of 10.000€ per month per researcher, the total costs at this point would add up to 20.000€.

After the UX research phase, the two possible scenarios mentioned above are conceivable:

These two scenarios are part of the stage where the benefit of failing fast leads to a higher chance of success. UX can help in identifying retention factors early in the product development process –– and thereby prevent the waste of time and labour resources.

Failure itself doesn’t lead to innovation, but it’s how you deal with failure that matters.

The ROI of UX in company building has another substantial aspect which is based on two key premises:

1. The later changes are implemented in the development process, the more costly they are.

In fact, one study has found that “once a system is in development, correcting a problem costs 10 times more than fixing the same problem in design. If the system has been released, it costs 100 times more relative to fixing in design”. 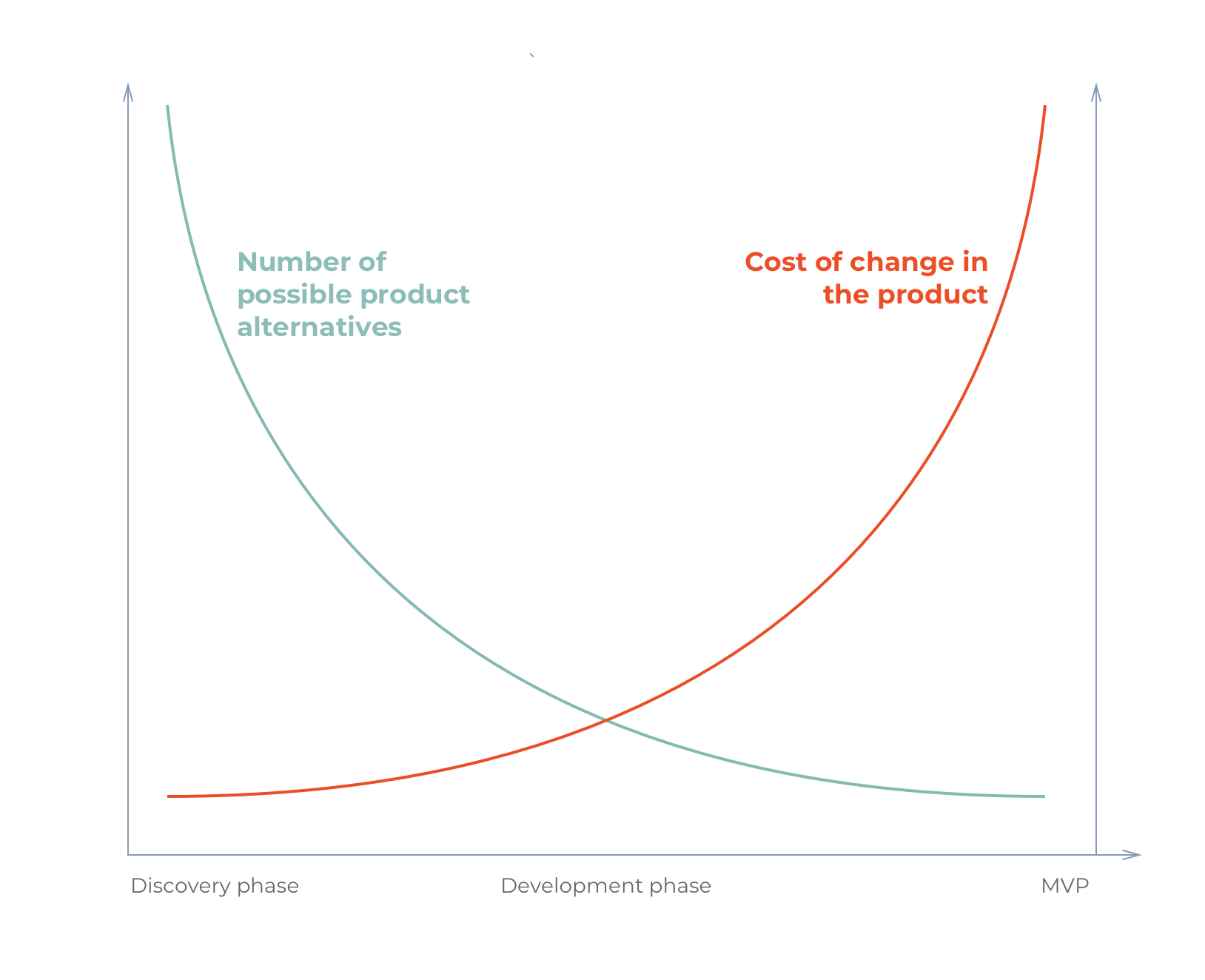 2. The absence of UX experts in projects causes more changes during development, which significantly increases the investment.

It has been shown that “UX designers reduce the time developers need to re-work or ‘fix’ a product by up to 50%”.

Let’s imagine again that a company is running a project without the involvement of UX, and the developing project requires the implementation of 20 changes. Assuming a developer salary of 50€ per hour, and an average of 8 hours to fix one change, the costs of changing the product amounts to a total of 8.000€.

The Systems Sciences Institute at IBM has reported that “the cost to fix an error found after product release was four to five times as much as one uncovered during design, and up to 100 times more than one identified in the maintenance phase.” If we apply a conservative factor of 4 when changes are implemented late in the process, we are talking about a total cost of 32.000€.

Now, if we use our first premise, which says that UX reduces the time developers need to fix a product by up to 50%, we are talking about cost savings of up to 16.000€ in product development as compared to fixing changes late in the process without employing UX. 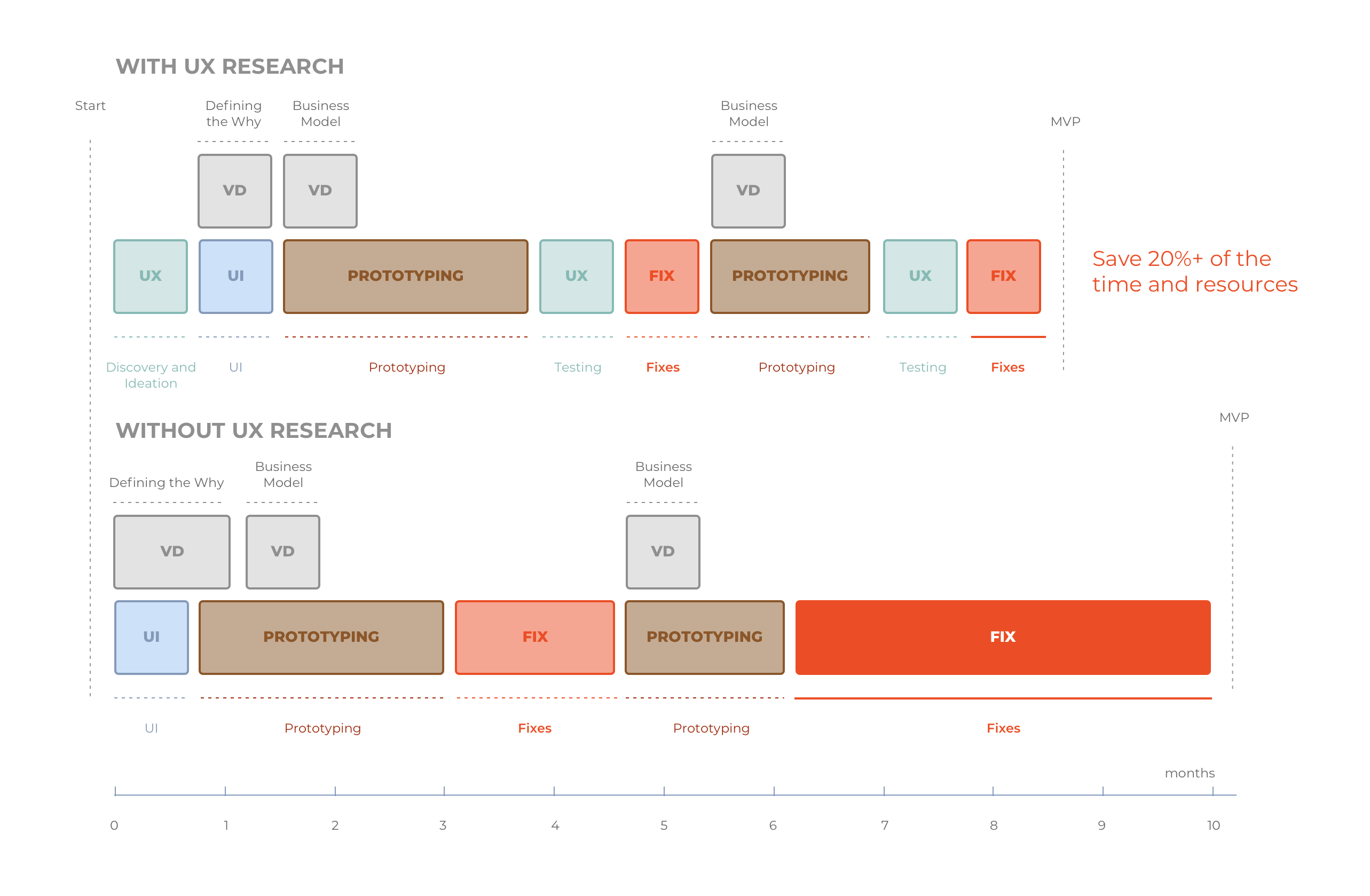 With UX, less changes need to be made, significantly reducing costs.

As you can see, implementing a change later in the life cycle of the software costs exponentially more. Adding the research phase in the beginning, as well as testing will help reduce the development time and maximize the product’s probability of success.

How we optimised UX processes for better ROI at WATTx

When building companies, you constantly tap into the unknown and have to be open to arising problematics as well as new technologies and methods to evaluate. Assuming that an idea will work out or that the product you developed will be successful without ever talking to your target users is a gamble. You won’t know what to do and therefore it will be a time-intense process with a very expensive cost for failure.

This is why at WATTx, for every single project, we employ a rigorous process that involves a substantial amount of UX resources from the start. The initial research phase can take from 3 weeks to 2 months. Depending on the scope of the project, the UX approach can be

Once the broader research is done (1), the research outcomes and findings usually feed into a more focused cycle (2). The goal at this stage is to understand if the assumed problems in the beginning (1) are real, and, if so, to identify linked conditions and prerequisites.

It is only after the definition phase that we ideate and ask ourselves what potential solutions may exist that could solve the problems we identified. If we fail to identify a user need in the research phase, the failure won’t be too drastic as the investment at that stage has been rather low.

We are WATTx, a deep tech company builder located in Berlin. We expanded our operations in late 2017, and are now collaborating with external clients in order to transform Mittelstand and bring new ideas and business opportunities into life.

Reach out to us by shooting an e-mail to Tristan.